What you need to know

Wood dust can cause serious health problems. It can cause asthma, which carpenters and joiners  are four times more likely to get compared with other UK workers. The Control of Substances Hazardous to Health (COSHH) Regulations 2002

require that you protect workers from the hazards of wood dust.
Hardwood dust can cause cancer, particularly of the nose.

Settled dust contains the fine particles that are most likely to damage the lungs.

Both hardwood and softwood dusts have a Workplace Exposure Limit (WEL) of 5mg/m3 which must not be exceeded. These are limits placed on the amount of dust in the air, averaged over an eight-hour working day. However, you must reduce exposure to wood dust to as low as ‘reasonably practicable’.

Because wood dust causes asthma any health effects must be picked up early. This can be done using health surveillance.

For most woods, low level health surveillance will do. When someone first starts in a job where they are exposed to wood dust they should fill in a questionnaire, for example: Sample questionnaire (when worker starts work)

These questionnaires tell you what to do if you think someone has been affected.
A higher level of health surveillance, including lung function testing, is needed for exposures to woods such as western red cedar which are a known asthmagen.

Ensuring correct RPE is used whilst working with Wood to prevent lung diseases.

See more information on our course 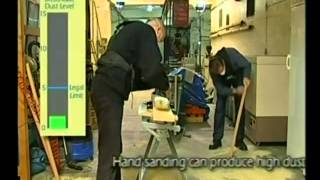 A carpenter who was given a false negative cancer result at an Eastbourne hospital died of an occupational tumour, an inquest has heard. The carpenter died at his home on Christmas Day 2009 from cancer of the nose. At an inquest at Eastbourne Magistrates Court into the death of the 67-year-old, the coroner was told the deceased had been transferred to the hospital by his doctor after complaining of sinus problems. After various examinations and tests, samples from the tumour were sent for analysis. The tests came back as benign but two-and-a-half months later the carpenter was diagnosed with cancer. The Coroner recorded a verdict of industrial disease.